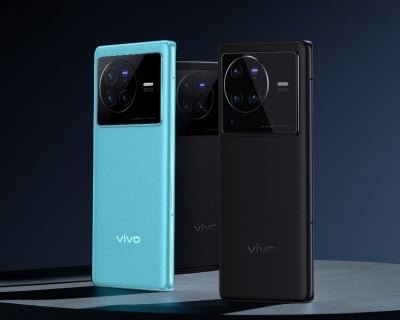 New Delhi, May 18 (IANS): As the global smartphone brand Vivo on Wednesday launched its much-anticipated flagship smartphone Vivo X80 series in the country, a top company executive revealed that its premium segment has helped the brand grow by 300 per cent in India.
According to Paigam Danish, director-Business Strategy, Vivo India, the company has grown by 300 per cent in the premium segment in the past one year in the offline market, despite the pandemic’s impact on smartphone industry and chip shortage.
“I think it is really an important point for us because this shows that consumers are accepting our product in the premium segment. We feel India has a very big potential in terms of smartphone growth and we will be having a healthy growth this year too,” Danish told IANS.
Meanwhile, the company has unveiled two new smartphones under the camera-centric X80 series — Vivo X80 Pro and Vivo X80. The X80 Pro with 12GB+256GB storage is priced at Rs 79,999, while the X80 is priced at Rs 54,999 for 8GB+128GB variant and Rs 59,999 for 12GB+256GB variant.
X80 Pro sports quad rear camera setup with a 50MP ultra-sensing GNV camera with optical image stabilisation (OIS), 48MP wide-angle camera, 12MP gimbal portrait camera, an 8MP Periscope Camera, along with a 32MP front camera.
The company has also collaborated with ZEISS for new cinematography features. The 12MP ZEISS Gimbal Portrait Camera is said to be the industry’s first portrait camera with an in-built gimbal that allows increased exposure and stability.
“Our objective is very clear that we care about consumer needs,” Danish said.
The entire X80 series is equipped with the latest iteration of Vivo’s professional imaging chip, Vivo V1+ chip, which delivers an elevated experience to users with a built-in AI system for professional-level visual enhancement. Furthermore, the chip enhances the X80 series visual experience in display and gaming.
While X80 Pro is powered by the Qualcomm Snapdragon 8 Gen 1 chipset, the X80 comes with MediaTek Dimensity 9000 chipset and runs the Android 12 operating system. The X80 is powered by a 4,500mAh battery while the Pro models are powered by a 4,700mAh battery. Both the smartphones come with 80W fast charging support.
On being asked about the other driving reasons behind the success of the brand in the country, Danish said: “There are multiple factors that have enabled Vivo to grow in the country. There is a very long-term commitment of Vivo for the Indian consumer and ecosystem and that has played a major role to grow in the country”.
The X80 Series follows Vivo’s commitment to ‘Make in India’ and has been manufactured at the company’s Greater Noida facility that employs around 10,000 people.