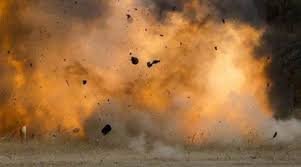 DIBRUGARH: A 25-year-old man was killed on Tuesday in a blast in his outhouse in Dibrugarh district, police said. Dibrugarh’s additional superintendent of police Bitul Chetia said the man, identified as Rituraj Mech, was killed in a suspected cylinder blast at Da-Hukuta village in Kamalabari in Duliajan police station area. “He was working in his outhouse godown when the blast took place. His body is very badly mutilated due to the impact of the explosion. We have called forensic experts to examine the site and look for evidence,” the officer said. The police have registered a case of unnatural death, he added.

The blast was so powerful that parts of a cylinder were found on the roof of a house 50 metres away from the site, official sources said.

“The deceased had worked for private firms engaged in Oil India’s exploration survey, which involves the usages of explosives such as gelatin sticks. We suspect that he had kept some of those at the house and accidentally those exploded today,” one of the sources said.