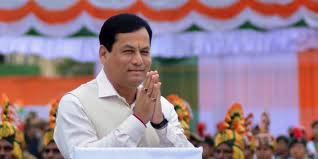 HT Correspondent
TEZPUR, Jan 22: The Union minister of Ports, Shipping and Waterways and Cabinet minister of AYUSH, Sarbananda Sonowal highly praised the leadership of Prime Minister Narendra Modi and state chief minister Himanta Biswa Sarma in Tezpur on Saturday at a party meeting held at Tezpur Convention Centre, Batamari here.
BJP is now preparing for the Lok Sabha elections and the party will decide who will be given the party ticket, he added. The Union minister further said, the country has made unprecedented progress under the leadership of Prime Minister Narendra Modi and the development work in the state has also progressed significantly.
“The Bharatiya Janata Party has been working dedicatedly for the overall upliftment of the country through patriotism since its inception. The dedicated service of the workers and the unwavering response of the people at all levels are the driving force of our party,” he said.
He had an intimate conversation with Bharatiya Janata Party, Sonitpur district workers and office bearers in Tezpur and discussed further strengthening of the party’s organisational strength.
He urged every worker to play a leading role in the firm goal set by the Prime Minister Narendra Modi to make India a self-reliant nation in the days ahead. While interacting with the party workers he urged them to play an important role in the successful implementation of various public welfare schemes of the government and bringing the schemes to the people.
He said that the Congress has ruled the country for a long time but what they could not do has been achieved under Modi’s leadership and special emphasis has also been given on economic development of the north-east region of the country. He informed the media that a floating river port would be constructed in Biswanath soon.
Along with other party office bearers and workers, the programme was also attended by Barchala MLA Ganesh Kumar Limbu, Sonitpur District BJP president Batas Orang.
Earlier, the minister visited the historic Baresaharia Bhaona Kshetra in Jamugurihat and attended a party meeting at Biswanath Chariali too.