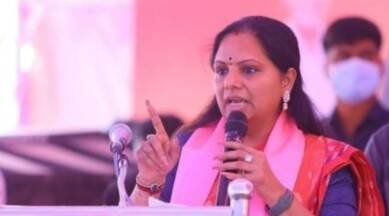 Hyderabad, Dec 1 (PTI): TRS MLC K Kavitha on Thursday said she and her party leaders who are currently under the radar of the Central agencies such as the Enforcement Directorate are ready to face any inquiry.

She was reacting to reports that her name figured in a remand report by the Enforcement Directorate on one of the accused-Amit Arora- in the Delhi liquor scam case.

“We will face any kind of inquiry. If the agencies come and ask us questions we will certainly answer. But tarnishing leaders’ images by giving selective leaks to the media, people will refute it,” Kavitha told reporters here.

Alleging that BJP has toppled eight democratically elected State Governments and snatched power through backdoor politics, she dared Prime Minister Narendra Modi to put her and other leaders behind the bars.

“I request Modi that this attitude has to change. It is not possible to win elections by using the ED and CBI. It is very difficult with people of Telangana who are cleverer.

Kavitha claimed that it has become a regular practice to send agencies such as ED and CBI to poll-bound States. Telangana is slated to go for Assembly polls November or December next year.

“ED arrives (to poll-bounds States) before Modi goes,” she slammed.

As long as TRS works for the people’s welfare nothing will happen. The ruling party workers gathered in large numbers at her residence expressing solidarity.

Later, in a tweet she said the formation of Bharat Rashtra Samithi (BRS) by Rao has rattled the BJP, spreading hate and intimidation will not work with TRS cadre.

“The formation of BRS by CM KCR has rattled the BJP. These tricks of peddling hate, preaching bigotry & practice of intimidation won’t work with the army of TRS Party. We are committed towards the people of Telangana and nothing can stop us from serving them,” she tweeted.