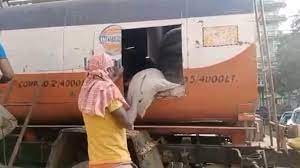 GUWAHATI: Cachar police on Friday seized around 2,000 kgs of Burmese Supari which was illegally being transported from Mizoram to Assam at Lailapur checkpost near Assam-Mizoram border.

The banned contraband was found sealed inside the oil tanker of the vehicle.

According to reports, the Burmese Supari was recovered from the vehicle bearing registration number AS-28-AC-0225.

Police said that they have arrested the driver of the vehicle and has been identified as Saabul Uddin. Police further said that they are questioning the apprehended driver and further investigation is on.

Earlier, Lailapur Police on December 7 seized a truck loaded with Burmese Supari in Dhalai. The truck which was travelling to Assam from Mizoram was intercepted during a Naka check near Lailapur police check gate.

On checking, around 290 sacks of illegal Burmese Supari were seized from the truck. The truck bearing registration number AS 01 LC 4164 was also seized during the process.