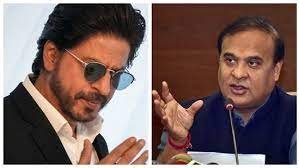 Guwahati, Jan 22 (PTI): Assam Chief Minister Himanta Biswa Sarma said Bollywood actor Shah Rukh Khan(SRK) talked to him over the phone early on Sunday and expressed concern over a protest against his new film ‘Pathaan’ in the city.

Sarma assured the actor that his government will enquire about the demonstration against the movie and ensure that “no such untoward incidents” would occur again.

The development comes a day after the CM had said “who is Shahrukh Khan? I don’t know anything about him or his film ‘Pathaan’,” while responding to queries by reporters about the violent protest by Bajrang Dal activists, who held a demonstration in front of a theatre at Narengi in the city on Friday, where the film is slated to be screened.

The far right-wing group’s volunteers tore down the film’s posters and burnt them.

“Bollywood actor Shri @iamsrk called me and we talked today morning at 2 am. He expressed concern about an incident in Guwahati during screening of his film. I assured him that it’s duty of state govt to maintain law & order. We’ll enquire and ensure no such untoward incidents,” Sarma said on Twitter.

Opposition leaders tore into the CM’s statement made on Sunday as volte face after his nonchalance a day before, with the Congress describing it as a “publicity stunt” and AJP questioning why Sarma took Shah Rukh’s call at 2 am in the night since he “doesn’t even know” the actor.

Notably, the CM had on Saturday said action would be taken if law and order is violated, though Khan had not called him over the matter.

Bollywood star Shah Rukh Khan and the movie ‘Pathaan’ are facing a backlash from far-right ‘Hindutva’ groups for showing Deepika Padukone in a saffron bikini in a song ‘Besharam Rang’.

Many leaders, including those in the Vishwa Hindu Parishad, have demanded a ban on the film.

‘Pathaan’, which has been directed by Siddharth Anand, will be released on January 25.

Opposition parties took a jibe at the chief minister for his “who is Shah Rukh Khan” remark, maintaining that it was a “publicity stunt”.

Reacting to the CM’s comment on the actor, Congress’ senior spokesperson Bobbeeta Sharma said, “Our chief minister is in the habit of uttering such things. Just the other day he said he didn’t know our senior leader Jairam Ramesh whereas Sarma was a Congressman for decades.”

“It could be a kind of publicity stunt to draw attention,” said Sharma, a former chairperson of Assam State Film Finance and Development Corporation and actor.

Assam Jatiya Parishad (AJP) general secretary and cultural activist Jagadish Bhuyan took a swipe at the CM on the microblogging site and wrote: “Who is Shah Rukh Khan??? Why was the chief minister waiting till 2 am to pick up call from a Shah Rukh Khan he doesn’t even know?”

Sharma also wrote on social media that the Bollywood actor had also called the owner of Gold Cinema franchise in Guwahati. Bajrang Dal activists held the demonstration in front of one of its theatres.

“That’s really nice of @iamsrk. Came to know that he called the owner of Gold Cinema, Rajib Bora too around the same time at night. That’s what makes #ShahRukhKhan who he is !!”, the Congress leader wrote, sharing the CM’s Tweet about the call from the actor.