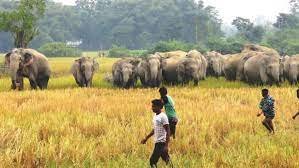 DIBRUGARH, Nov 21: Two persons were trampled to death by wild elephants at Bordubi Ting area under Doomdooma forest division in upper Assam’s Tinsukia district on Sunday night.
The deceased have been identified as – Ram Tanti and Budhin Bhumij.
The elephants went into a rampage mode after coming out of the Doomdooma reserve forest and eventually entering human habitat.
“Two persons were killed by a wild elephant while they were sleeping inside their house. The wild elephants entered the human settlement area in search of food. We have sent the bodies for postmortem,” said Rajendra Singh Bharati, DFO, Doomdooma forest division.
He further said, “Man-elephant conflict rises due to the shrinking of forest cover and the elephants come out from forest in search of food.”
Notably, there has been a considerable rise in the number of human-elephant conflicts in Assam in recent times.
Encroachment of forest lands by humans is believed to be the primary reason for this growing problem of human-elephant conflict in the state.
In the last ten years, over 800 people and over 900 elephants have been killed in Assam due to human-elephant conflicts.