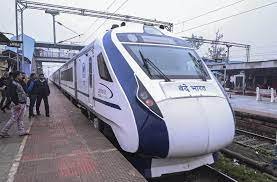 The Prime Minister who also launched four railway projects for West Bengal and laid the foundation stone for the redevelopment of the New Jalpaiguri railway station, pointed out that railway stations, including New Jalpaiguri, are being developed on the lines of airports. In all, the railway projects inaugurated by him for West Bengal are estimated to be worth more than Rs 5,000 crore.

Noting that doubling of tracks and electrification is underway at a record speed, he said that the eastern and western freight corridors will bring revolutionary changes to the country’s economy.

“Today’s Vande Bharat train was launched from the land where ‘Vande Mataram’ slogan was coined. The launch date of December 30 is significant as Netaji Subhas Chandra Bose had hoisted the tricolour in Andaman and Nicobar Islands on this day in 1943,” he said.

“In the 21st century, for rapid development of the country, growth and reform of railways is essential. A nationwide campaign is underway to transform railways,” Modi said.

He noted that new airports, waterways, ports and roads are being constructed to ensure seamless connectivity for people.

Later in the day, he also informed his audience of the many initiatives taken to clean the Ganges in Bengal and provide safe drinking water in the state.

“India is working towards boosting its Jal Shakti. On January 13, a cruise will set sail from Varanasi in Uttar Pradesh to Dibrugarh in Assam via Bangladesh. The 3,200-km-long journey will be the first-of-its kind in the world and it is a reflection of the growing cruise tourism in the country,” he said.

Among other projects, Modi spoke of the Adi Ganga project to clean the river of effluents by spending Rs 600 crore on infrastructure.

He said that the Centre is laying stress on preventing pollution of rivers.

“West Bengal will have 25 new sewage treatment projects, 11 of which have already been completed, while seven will be launched during the day,” he said.

The PM said that modern sewage treatment plants are being developed keeping in mind the requirements of the future.

“In this year of Azaadi ke Amrit Kaal, we will adopt a forward-looking approach to take the country ahead. The world is looking at India with great faith; every Indian has to exert himself to live up to this expectation,” he added.

The PM flagged off train services along the 6.5-km-stretch of Joka-Taratala section of Kolkata Metro built at a cost of Rs 2,477 crore.

He also dedicated four railway projects to the nation. The 25.8-km-long third line on the busy Boinchi-Shaktigarh route, on which 70 pairs of trains run daily, was developed at a cost of Rs 424 crore. The new line has created additional capacity for 21 pairs of trains.

He also launched the 25.4-km-long fourth line between Dankuni and Chandanpur built at a cost Rs 600 crore.

The PM also dedicated to the nation the 25.4-km double line between Nimtita and New Farakka, constructed at Rs 269 crore, and doubling of tracks between Ambari Falakata and New Maynaguri stations, and New Mainaguri and Gumanihat, built at a total cost of Rs 2,093 crore.

The Vande Bharat Express was flagged off in the presence of West Bengal chief minister Mamata Banerjee.

The seventh Vande Bharat Express started its journey at 11.45 am from platform number 22 of Howrah Station to travel to New Jalpaiguri, the gateway to the Northeast.

The blue-and-white train, which covers a distance of 564 km in 7.45 hours, will save three hours of travel time compared to other trains on the route, officials said. It will have three stoppages at Barsoi, Malda and Bolpur.

The Vande Bharat Express with modern passenger amenities is likely to be preferred both by regular passengers, tea industry executives and tourists travelling to the Himalayas in North Bengal and Sikkim.

The state-of-the-art train has 16 coaches, including two for drivers.

Earlier, Banerjee, while speaking on the occasion, condoled the demise of Modi’s mother Hiraben. “Your mother is also our mother,” she said.

The CM also said work on four out of the five railway projects that Modi launched were started during her tenure as railway minister.