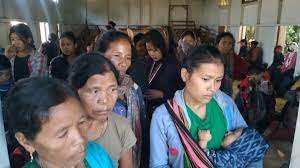 AIZAWL, Dec 31 (PTI): Already overburdened with Kuki-Chin refugees from strife-torn Myanmar, Mizoram, which is reeling under a financial crisis, received a fresh stream of displaced people from the Chittagong Hill Tracts of Bangladesh this year.
More than 300 Kuki-Chin refugees from CHT took shelter in the north-eastern state following armed clashes between Bangladesh Army and insurgents belonging to the Kuki-Chin National Army (KNA).
The state now hosts a total of 40,000 refugees from Myanmar and Bangladesh. Mizos share ethnic ties with the Kuki-Chin people.
The Zoramthanga administration is reeling under a severe financial crunch due to the Covid-19 pandemic and delay by the Centre in releasing the state’s share of taxes and grants.
The crisis has resulted in delays in timely payment of salaries to government employees, and pensions to retirees, besides clearance of bills.
However, the state government hopes that the crisis will be resolved in 2023 with the release of more funds from the Centre.
Mizoram also put in efforts to resolve the inter-state border dispute with Assam, with both sides holding talks in August and November over the issue. The chief ministers of the two states also held a meeting in New Delhi in September to amicably resolve the matter.
The two neighbouring states had witnessed a border clash last year, with the police forces of the two states exchanging fire, leading to the death of at least six personnel and a civilian from Assam.
Mizoram witnessed two tragic incidents in the year. A stone quarry collapse in Hnahthial district in November resulted in the tragic death of 12 people, while 11 died in an oil tanker fire at Tuirial village in Aizawl district in October.
The year began with a spurt in Covid-19 cases of the Omicron variant, forcing the state government to shut schools for the first three months. However, with the infections showing a downward trend from April, the administration eased the Covid curbs.
For the first time in the history of Mizoram, the ruling Mizo National Front (MNF) stitched an alliance with its arch rival Congress to form the government in Mara Autonomous District Council (MADC) after elections held in May threw up a hung council.
However, the MNF-Congress council was voted out of power just six months later in a no-confidence motion, with the BJP, the single-largest party with 12 members, forming the council with three MNF members who quit the ruling party in the state.
The cabinet of chief minister Zoramthanga also witnessed a rejig, with the resignation of a minister and the induction of four others.
The resignation of K Beichhua, who was a minister of state for excise and narcotics, animal husbandry and veterinary, social welfare and sericulture departments, was believed in political circles of the state to be a fallout of the loss in MADC in Siaha district, from where the MNF leader was elected.
Shortly after his resignation, three ministers of state were made a part of the cabinet. Zoramthanga also inducted a new face, Lalrinawma, who resigned as the deputy speaker of the assembly, into the council of ministers.
Mizoram also witnessed the outbreak of African Swine Fever, and Fall Armyworm, affecting thousands of families.