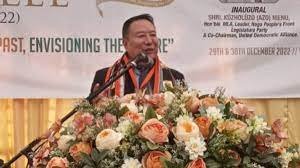 Speaking at the golden jubilee celebration of the Thürütsüswümi Students’ Union as the chief guest, Nienu said the Centre failed to table the Naga issue in the recently concluded winter session of the Parliament.

Saying that the Naga people held high hopes for a solution to the Naga issue, the NPF leader lamented that the central government has dashed their hopes.

The NPF is a part of the Nationalist Democratic Progressive Party-led United Democratic Alliance opposition-less government in Nagaland in which the BJP is also a partner.

Nienu, however, asserted that his party will always remain committed and strive for early solution to the Naga political issue that is honourable, inclusive and acceptable.

Maintaining that since a solution before the assembly election in the state due early next year is a distant dream at the moment, he said the forthcoming poll is imminent.

“The Naga people should be mentally prepared as the election commission may announce the election schedule in the state anytime,” Nienu added.

“Election is a mechanism to either shape or design our future and destiny or destroy them,” he said and so called upon the Naga people to choose and vote for the right party and the right leaders to represent them.

Nienu thanked the pioneers of the Thürütsüswümi Students Union, the toppers and those students who had come out with flying colours and brought laurels to the community.