Nagaon police arrest 10 oil thieves from across the State 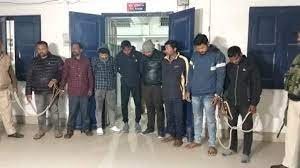 NAGAON, Dec 31: One Emdadul Ali, who was arrested on Friday in connection with an oil theft case from an oil pipeline near Nagaon Uriagoan bypass, was injured in police firing near at Nagaon bypass while trying to escape from police on Friday night.

Sources from Nagaon police claimed that he was arrested along with other 10 thieves allegedly involved in a recent oil theft case near Uriagoan bypass Chariali. He was taken out in search of another accused person by a police team towards Guwahati and when the police vehicle reached at Nagaon bypass road, Emdadul Ali alias Bhaiti jumped out from the vehicle by pushing a police constable and then fled from the scene.

Police officials in the vehicle immediately fired one round in the air and asked him to surrender, sources said, adding that he did not follow the instructions for which police personnel fired another round and found him injured in one of his legs.

Meanwhile he was admitted in Nagaon BP Civil Hospital at night itself where doctor on – duty immediately referred to Guwahati Medical College Hospital, said SP Leena Doley while addressing the local media persons here on Saturday. She said that in the incident, one police constable named Bhaskar Bora also sustained minor injury.

SP Doley however claimed it too that Emdadul Ali alias Bhaiti was the main kingpin of the oil thefts across the State.

She said that following an oil theft case a couple days back, a special police team from the district secretly carried out a massive operation at various places across the State including Guwahati, Golaghat, Kaliabor, Borpeta, etc and arrested eleven persons. Besides, during the operation, police also seized two oil tankers bearing registration number NL-02-L-3293, AS-01-LC-3024 and a Verna car bearing registration number AS-01-BF-6466 respectively from Nongpoh in Meghalaya and Numaligarh Ponkagaon in Golaghat district, SP Doley added.

The other ten persons who were also arrested in connection with the oil theft case by the police during the operation, they have been identified as Pranjit Bora, Sagar Bora of Nagaon Bhutaigaon, Tapan Bonia of Uriagaon, Narayan Sarkar of Guwahati Noonmati area, Parul Hussain of Merapani in Golaghat, Gopal Dey of Jagiroad in Morigaon, Ashir Uddin Haque of Jayantipur Kuwaritol, Kaliabor, Bitu Singha of Numaligarh Ponkagaon in Golaghat, Sukkur Ali of Howly in Barpeta and Naren Bora alias Candy of Tinsukia district, sources added.