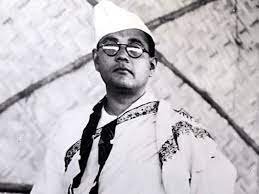 DIPHU, Jan 23: Along with the rest of the country, the 126th birth anniversary of Netaji Subhash Chandra Bose was also celebrated here at Netaji Park in front of the Circuit House on Monday.

The celebration was organised by Netaji Conscious Society and was participated by school children of various schools.

Deputy commissioner of Karbi Anglong, Madhumita Bhagawati with the leaders of Netaji Conscious Society garlanded the statue of Netaji.

“It is a great pleasure and an important day to honour the great leader of the freedom movement. Netaji Subhash Chandra Bose had launched the freedom movement to free India from British rule. His ideals and principles should be followed,” the DC said.

A senior citizen and president of Netaji Conscious Society, Pran Kumar Dutta said Netaji Subhash Chandra Bose had raised his own army ‘Azad Hind Fauj’ to fight against the British.

Dutta also said Netaji was one of the great leaders during the Indian freedom movement and sacrificed his life for the country, but till today the government has not come up with declassification of Netaji files.

“It is heartening to know that Netaji was one of the great leaders during the India freedom movement, but there is a lack of due respect to this great leader. The present central government has assured the people to come up with the documents of the disappearance of Netaji, but has failed to do it,” Dutta added.

On the occasion, students of Binapani High School presented patriotic songs and dances.