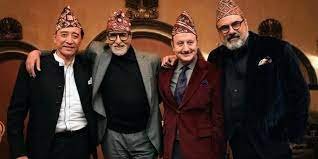 Mumbai, Dec 30 (PTI): Filmmaker Sooraj R Barjatya’s “Uunchai” will start streaming on ZEE5 from January 6, the streaming platform announced Friday. Released in theatres on November 11, the adventure drama featured an ensemble cast of Amitabh Bachchan, Anupam Kher, Boman Irani, Danny Denzongpa, Neena Gupta and Parineeti Chopra.
Barjatya said the film had a successful run at the box-office and now he is thrilled to present “Uunchai” to viewers of ZEE5.
He added the film has been a labour of seven years of passion, hard-work and love. “I appeal to all our fans to start the new year with this film which is a heartfelt ode to friendship. ‘Uunchai’ is sure to make the viewers chuckle and cry in equal parts and tug at their heartstrings as it will take the viewers through a rollercoaster of emotions,” the director said in a statement. “Uunchai” tracks the journey of three aged friends (Bachchan, Kher and Irani), who decide to embark on a trek to the Everest base camp to fulfil the wish of their late friend Bhupen (Denzongpa).
How their trek turns out to be a personal, emotional, and spiritual experience as they battle their physical limitations and discover freedom forms the story of the film. Manish Kalra, Chief Business Officer at ZEE5 India, said they are excited to enter the new year with the premiere of “Uunchai”, which had turned out to be one of the best family entertainers of 2022. “A film by Sooraj Barjatya with a never-seen-before ensemble on-screen is a must watch for people across ages but especially the elderly as it drives home the message of living life to the fullest and what better reminder than the start of a new year to dream big and live big,” Kalra said.