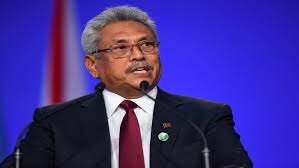 COLOMBO, May 17 (PTI): A no-confidence motion tabled by the Opposition against Sri Lankan President Gotabaya Rajapaksa was defeated in Parliament on Tuesday, in a comfortable win for the embattled President amidst nationwide protests demanding his resignation due to the country’s worst-ever economic crisis.

The motion by Opposition Tamil National Alliance (TNA) MP M A Sumanthiran to suspend Parliament’s standing orders in order to debate an expression of displeasure over President Rajapaksa was defeated with 119 MPs voting against it, the Economy Next newspaper reported.

Only 68 MPs voted in favour of the motion, it said, giving the 72-year-old President a comfortable victory.

With the motion, the Opposition sought to demonstrate how nationwide calls for President Rajapaksa’s resignation are reflected in the country’s legislature, the report said.

According to SJB MP Harsha de Silva, among those who voted against the motion was Sri Lanka’s newly-elected Prime Minister Ranil Wickremesinghe.

On Tuesday, Parliament met for the first time after the appointment of new Prime Minister Wickremesinghe, as the country looks to undertake major constitutional reforms amid the worst economic crisis.

Sumanthiran, who moved the motion, wanted the standing orders suspended to carry on with the debate.

The government, however, objected to suspending the standing orders.

The Speaker then ordered a vote on the question of suspending the standing orders.

The government won the vote and forced the adjournment motion moved on the violence suffered by the ruling party politicians since May 9.

The police on Monday said that some 78 ruling party politicians had suffered damage to properties.

The Opposition said the motion of displeasure could be moved on Friday.

The Rajapaksa government had taken some arbitrary decisions like banning chemical fertiliser imports in favour of organic farming and resisting turning to the International Monetary Fund which led to the country’s worst economic crisis since its independence from Britain in 1948.

A crippling shortage of foreign reserves has led to long queues for fuel, cooking gas and other essentials while power cuts and soaring food prices heaped misery on the people.

The economic uncertainty also triggered a political crisis in Sri Lanka and a demand for the resignation of the powerful Rajapaksas.

President Gotabaya Rajapaksa sacked his Cabinet and appointed a younger Cabinet as a response to the demand for his resignation. A continuous protest opposite his secretariat has now gone on for well over a month. On May 9, Gotabaya Rajapaksa’s elder brother Mahinda Rajapaksa resigned as the prime minister to make way for the president to appoint an interim all political party government. Wickremesinghe was appointed the country’s new prime minister on Thursday.