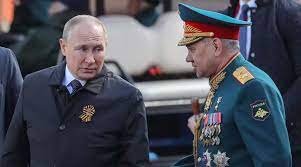 LONDON, May 17 (IANS): Russian President Vladimir Putin has become so personally involved in the Ukraine war that he is making operational and tactical decisions “at the level of a colonel or brigadier”, according to western military sources.

Putin is helping determine the movement of forces in the Donbas, where last week Russians suffered a bloody defeat as they tried on multiple occasions to cross a strategic river in the east of Ukraine, the Guardian quoted the sources as saying.

The sources added that Putin is still working closely with Gen Valery Gerasimov, the commander of the Russian armed forces, in contrast to claims made by Ukraine last week that the military chief had been sidelined.

“We think Putin and Gerasimov are involved in tactical decision making at a level we would normally expect to be taken by a colonel or a brigadier,” one of the sources said, referring to the ongoing battle in the east of Ukraine.

Moscow’s forces have so far failed to achieve a breakthrough in the Donbas, where they have been mounting an offensive for a month that has failed several times to encircle the smaller Ukrainian forces.

No further detail to back up the statement was provided, although it was implied the assessment about Putin’s close personal involvement was based on intelligence that had been received, the Guardian reported.

Last week’s failed attempt to cross the Siverskyi Donets river at Bilohorivka led to the destruction of more than 70 Russian vehicles, and the loss of at least one batallion’s worth of equipment, according to estimates based on aerial photography of the battle site.

The defeat was so serious it led some Russian military bloggers to comment “on the incompetence of the Russian military to their hundreds of thousands of followers”, according to the Institute for the Study of War, a rare sign of internal dissent.