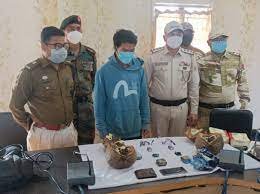 IMPHAL, Sept 25: Police in Manipur’s Thoubal district on Sunday recovered an IED which was planted by suspected militants at the house of an individual.

Police said that the IED was found planted at the veranda of the house of one Puyam Tenden Singh (54) of Langathel Thingel Leikai under Khongjom police station of the district.

Personnel of the Khongjom police station who rushed to the house on being informed by the family members called experts of the state police bomb detection and disposal squad and defused the same around 11:30 am, police said.

Police as well as family members are yet to ascertain the motive behind the planting of the IED.

The police have registered a case and initiated an investigation, the police added.

In another incident, a team of Imphal East district police commandos apprehended two active cadres of armed group PREPAK (Pro) during a counter insurgency operation at Wangkhei Ningthem Pukhri Mapal Pebam Leirak on Sunday, around 11:45 am.

Police said that the apprehended cadres have been identified as Moirangthem Sanajaoba Meitei (34) of Khongman Atom Leirak of Imphal-East district and Takhellamabam Johnson Meitei (32) of Kongba Khunou Mayai Leikai of same district with the former.

Two mobile phones, two aadhar cards and one scooter were seized from their possessions, the police said.

The police alleged that they were involved in extortion of money from the general public, government offices as party funds and about a week ago, they went to a house at Wangkhei Ningthem Pukhri Mapal and made a monetary demand for a sum of Rs 1 lakh.

The arrested persons along with the seized items were handed over to Porompat police station for taking up further necessary legal actions against them, the police added.