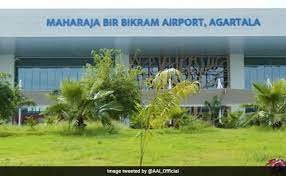 Around 30 per cent of passengers from Bangladesh use the MBB Airport to fly to many cities of India like Kolkata, Chennai, Bangalore and Mumbai for various purposes. The average footfall at the airport everyday is 4,200, the official said.

“The matter regarding opening of a foreign exchange counter in the airport premises was discussed in yesterday’s advisory committee meeting in presence of Union minister Pratima Bhoumik. It was decided to open a counter for foreign currency exchange counter by the current fiscal”, MBB Airport director, KC Meena told PTI.

He said the move is aimed at providing foreign currency exchange facility to fliers who are especially coming from Bangladesh. “This will also be a step towards introducing international flight service in Agartala-Chittagong route”, he said.

“The Ministry of Civil Aviation has already requested the Ministries of Home and Finance to give a green signal for starting international flight service from MBB Airport. A customs team has already visited the airport to see the facility for immigration of foreign travellers”, he said.

A demand was also placed to increase direct flight between Agartala and Delhi to enhance connectivity with the national capital, he said, adding currently Indigo operates one direct flight on the route.

Meena said the AAI has already requested the State Government to introduce taxi service from the airport for the benefit of passengers.