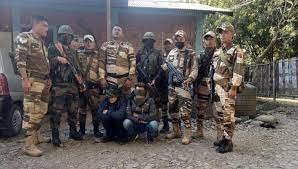 IMPHAL, Nov 21 (NNN): Security forces in Manipur recently apprehended two active cadres of Manipur Naga People Front (MNPF), in an operation at Andro in Imphal East district, according to police.
The apprehended cadres have been identified as Abner Jajo (35) of Kamjong district and Mashungkhui Jajo (26) of the same district, the police also said.
Police said that Abner Jajo is a self-styled corporal of the outfit and his army number is 151. He got basic military training from 252 Battalion Khoiriphaba of the outfit located in Myanmar and currently working under the command of MNPF chairman Francis, the police further said.
It further claimed Mashungkhui Jajo who joined the outfit in 2012 through one David of Chongdang as the self-styled lieutenant of the outfit. His army number is 130 and he got basic military training at Heikol in Myanmar.
A combined team of 4 Assam Rifles and special police commandos of the State Police apprehended them in an operation near Santhei Natural Park’s Gate under Andro police station of Imphal East district on Sunday at around 12.15 pm, police said.
The operation was launched based on specific information received from 4th AR regarding presence of suspected cadres of the outfit in the area.
Acting on the information, the combined team rushed to the area and conducted frisking and checking. They intercepted the two cadres who came by foot, police added.
The arrested active cadres were handed over to Andro police station for further necessary legal action against them, police further said.