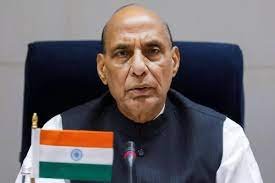 GUWAHATI, Nov 21: Defence minister Rajnath Singh on Monday stated that the government-accelerated development initiatives in the Northeast have transformed India’s ‘Look East policy’ into ‘Act East Policy’, leading to the all-around development of the region.

This has helped all the states in improving trade with South East Asian Nations, he said, addressing a two-day conclave on the theme of ‘Celebrating Contribution of India’s North East Region (NER) in Nation Building’, organised by the Indian Army and state governments of Assam, Meghalaya, Arunachal Pradesh, Tripura, Mizoram, Manipur and Nagaland as well as the North Eastern Zone Cultural Council (NEZCC) at Guwahati.

Rajnath said the Pradhan Mantri Gati Shakti Master Plan would act as a force multiplier in developing infrastructure facilities in the Northeast region. “Whether it is road construction, expansion of railways, or improvement of waterways, through Pradhan Mantri Gati Shakti, we are committed to strengthening the pace of development. We have also made a lot of progress in the field of energy. We have ensured the progress in solar and hydel projects, and have done the work of providing electricity to every nook and corner of the country,” he said.

Underlining the telecom revolution in India after it joined select countries where 5G facilities have been introduced, he assured the people of expanding the IT and TELECOM facilities to every nook and corner of the Northeastern region. “This will ensure economic development, good governance and public welfare. I have full faith that due to the hardworking nature of the young generation of the Northeast, and the facilities given by the government for ‘Ease of Doing Business’, the Northeast region is moving towards a golden future,” he added.

The defence minister said that building New India could be possible only with bold policy reforms, world-class infrastructure and top-class talent. “Through health, education, environment, sports, rural development, employment and small-scale industries, we are committed to the development of each and every citizen of the Northeast. The efforts of the people of the Northeast have a very important role to play in the motto of the government, ‘Sabka Saath, Sabka Vikas and Sabka Vishwas’,” the defence minister added.