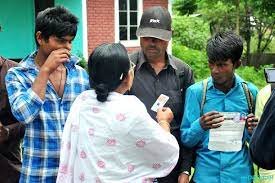 IMPHAL, Nov 21 (NNN): A local court has fined Rs 1,000 each to two non-local labourers who were found staying in the State without ILP (Inner Line Permit) pass.
The Imphal West district executive magistrate directed concerned authorities to penalise landlords who rent their houses or rooms to non-locals with no valid ILP passes with Rs 5,000.
The two non-local labourers were penalised by the executive magistrate before whom the police produced the two non-local labourers after formal arrest for violating the ILP.
Members of the Joint Committee on Inner Line Permit System (JCILPS) pulled up the non-locals during a drive against ILP violators at work places at Patsoi area of Imphal West district on Saturday and handed them over to the police.
While producing them in the court of the executive magistrate, the police charged them of entering the State without ILP.
The two non-locals also admitted that they entered the State without obtaining the mandatory ILP passes.
As they revealed that they entered the State without the ILP passes for the first time, the executive magistrate ordered them to pay a fine of Rs 1,000 each while directing them to obtain the pass from the district administration.
The order further imposed a fine of Rs 5,000 to the contractor who brought them into the State by violating the provisions of the ILP.
The Inner Line Permit regime was extended to Manipur with effect from January 1, 2020 with the President of India signing the order in this effect earlier in December 2019.