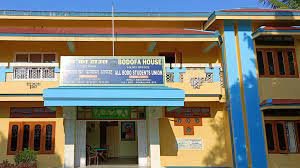 HT Correspondent
KOKRAJHAR, Dec 30: The All Bodo Students Union (ABSU) welcomes the delimitation process declared by the Election Commission of India
to start delimitation in Assam for the Assembly and Parliament from 1st January, 2023 onwards and also thanked the government of Assam for taking a proactive role on this matter.
In a press statement issued to the media on Friday, ABSU president Dipen Boro and general secretary Khanindra Basumatary said that the decision to start the delimitation of the Assembly and Parliamentary Constituencies in Assam.
“The students’ union will not compromise reservation in the proposed delimitation process at any cost. Identity of the Bodos, constitutional and political rights of the tribals in Sixth Schedule Bodoland Territorial Region (BTR) should remain intact without any changes. The students’ union strongly demands Kokrajhar Parliamentary Constituency (ST) must be kept status quo reserved for ST and newly proposed Udalguri Parliamentary Constituency (Lok Sabha) should be reserved for ST also,” the students’ union said.
“The students’ union strongly opposes the proposed draft prepared during 2008: ABSU will not accept the proposed draft prepared in 2008; where it is clearly shown de-reservation of the existing Kokrajhar Lok Sabha seat from ST reservation. Since independence tribals have been enjoying political rights in Kokrajhar Lok Sabha seat on the basis of the majority of tribal population. But unfortunately, and vehemently the seat has been proposed as unreserved in this draft for which ABSU had already opposed during 2008. Increasing numbers of the non-tribal population in BTR region is due to the large-scale illegal encroachment in tribal belts and blocks and other government lands in the last 50 years which is a serious concern for us. We demand both the state and council government to take strong policy decisions in this regard.”
“ABSU strongly opposes the draft and will not compromise on reserved seats be it in Assembly and Parliamentary Constituencies.”
The students’ union demands to protect the constitutional rights of the tribals as in Sixth Schedule: Kokrajhar Parliamentary Constituency (ST) Lok Sabha seat is situated under the jurisdiction of BTC in Bodoland Territorial Region created under the Sixth Schedule of the Constitution of India in 2003 BTC Act [Articles 244(2) and 275(1)] to protect, preserve and promote the constitutional and political rights of the tribals and for their identity. So, we believe the Sixth Schedule was meant to protect the rights and privileges of the tribal people from being engulfed by illegal migrants or encroachers. De-reservation of seats in Parliament and Assembly under BTR council will be an utter violation of the Sixth Schedule of the Indian Constitution.

Background and history of Bodo Movement
ABSU launched a vigorous democratic movement for Bodoland in 1987 to safeguard the identity, constitutional and political rights of the Bodos. Arms movement organisations like BLT and NDFB also struggled for the political and constitutional rights of the Bodos for long years. During this 34 years of movement, three accords had been signed with the name and arrangement of BAC 1993, BTC 2003 and BTR 2020. The background and history of the decade long movement is to protect the identity and to safeguard constitutional and political rights of Bodos.
In this regard, ABSU had already submitted a memorandum to the Election Commission of India, Prime Minister and Home minister during the month of September, 2022 expressing their concern.
The students’ union said that ABSU will discuss the matter with all the Bodo organisations and other tribal organisations of BTR and write letters to the leaders of regional and national political parties residing in BTR and Assam.
The students’ union will launch vigorous democratic peaceful movement if situation compels besides taking legal help if necessary to safeguard the constitutional rights and provision of the Sixth Schedule.