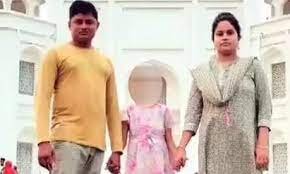 Guwahati, Dec 2 (PTI): A woman and her seven-year-old daughter were found dead in Guwahati on Friday, police said.

In a purported video, the woman alleged that she and her daughter were subjected to mental and physical harassment by her husband, and unable to bear it anymore, she decided to kill herself and their daughter.

Deputy commissioner of police (East) Sudhakar Singh said the bodies of the woman and her daughter were found in a room of their rented house in Hatigaon area of the city.

“Prima facie, it appears to be a case of suicide. But we are investigating all aspects,” he said.

Singh said the husband of the woman, his mother and sister were detained for questioning.

On the purported video recorded by the woman, the police officer said it was being examined.

“We have received the video. We are examining the details and the authenticity of it,” he added.